This information is for patients with a diagnosis of glaucoma or ocular hypertension considering treatment options.

Glaucoma can sometimes be treated successfully with medications to lower the pressure in the eye. If medications are not effective, laser and other surgical procedures could be of value in controlling the pressure and preventing further vision loss. Both medications and surgery are designed to do one of two things:

SLT is one option for lowering intraocular pressure (IOP) for patients who have open-angle glaucoma in the early stages. It can also be used in combination with drug therapy or as an alternative therapy when drugs fail. It is a flexible treatment option and can be repeated if necessary, depending on the individual patient's response.

The trabecular meshwork is located around the periphery of the iris. It is the site through which fluid formed in the eye drains out of the eye. This meshwork is treated directly with the laser to improve drainage through it. 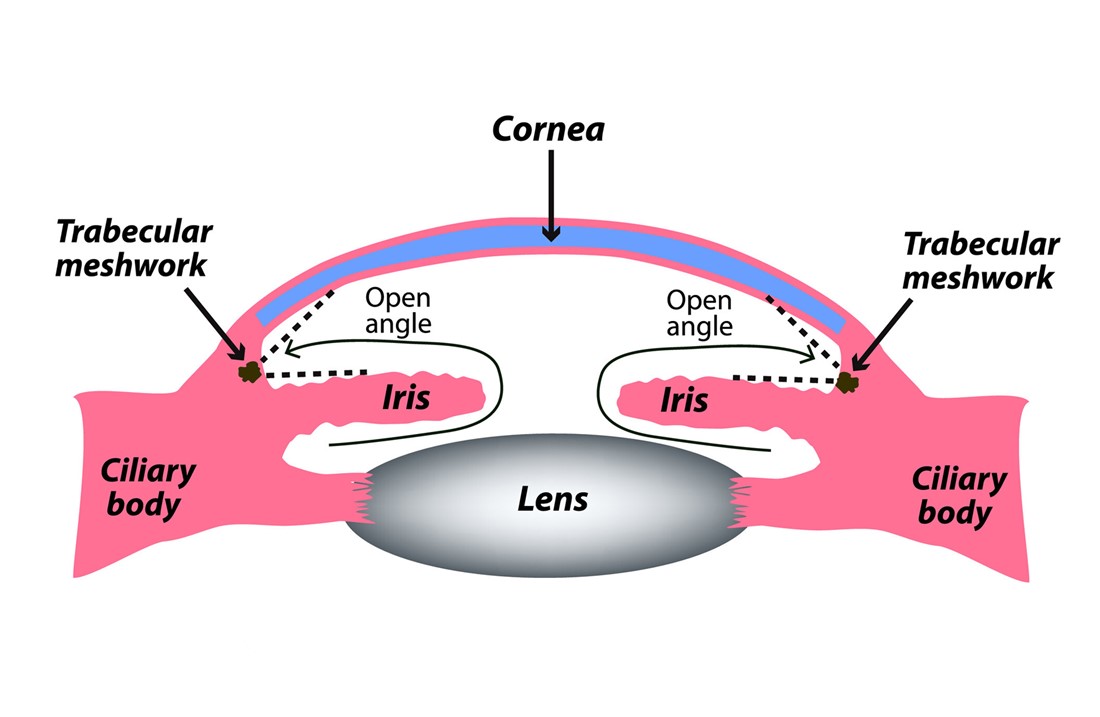 This diagram shows the configuration of the open angle and the position of the trabecular meshwork.

SLT uses short pulses of relatively low- energy light to target only the melanin- rich cells in the drainage channel of the eye. The laser pulses affect only these melanin-containing cells, with the surrounding structure remaining unaffected. This gentle laser treatment induces a response from the body in which white cells are released to clear the affected cells and rebuild the meshwork so that it functions effectively again, reducing the IOP.

Why is it called ‘selective’ ?

The type of laser used has minimal heat energy absorption because it is only taken up by selected pigmented tissue in the eye. Sometimes it is referred to as a “cold laser.” Because of this, the procedure produces less scar tissue and causes minimal pain.

SLT effectively lowers raised IOP without the side effects or difficulty of taking eye drops. The treatment is particularly suitable for patients who cannot correctly use or are intolerant to or would prefer to avoid using glaucoma medications. It can also be used alongside medication to enhance the overall IOP-lowering effect.

SLT is a newer form of a long- established treatment that has the advantage of not causing any damage to the tissue treated.

Treatment takes place in the outpatient department. A nurse will check your vision and put some drops in your eye to prevent the pressure rising and to make your pupil small. These drops might cause a temporary headache and can take up to 30 minutes to work. Your written consent will be taken and any questions can be answered.

Once seated in front of the laser machine, which looks similar to the microscope you will have been examined with in clinic, you will have anaesthetic drops put in to numb the front of your eye. A special lens will then be placed against the front surface of your eye. This is not painful, but it might feel a little strange. During the laser treatment, you might see some flashes of light and hear clicking noises. Most patients tolerate the laser treatment well, but some might feel slight discomfort. The procedure usually takes under 10 minutes.

About half an hour after your treatment, the pressure in your eye may be checked. You will then be given a prescription for drops to take at home for five days. You will receive an appointment to come back to clinic, which is to check that your eye is settling. The treatment might take up to eight weeks to work.

One key aspect of SLT is a favourable side effect profile, even when compared with glaucoma medications. Post-operative inflammation is common but generally mild, and treated with observation or eye drops or an oral non-steroidal anti-inflammatory drug. There is an approximately 5% incidence of IOP elevation after laser, which can be managed by glaucoma medications and usually goes away after 24 hours.

Your vision will be blurred for a few hours following your laser treatment, but this will settle. The chance of your vision being permanently affected from SLT is extremely small. You are also advised not to drive yourself to the hospital, as you will be unable to drive home.

It is possible for the pressure in your eye to increase immediately after the treatment and for there to be inflammation. In order to prevent this, you will have special drops instilled in your eye.

Rarely, the pressure in the eye rises to a very high pressure and does not come down. If this happens, you might require surgery to lower the pressure. However, please be assured that this is a very unusual occurrence.

Usually, we cannot predict how well the laser will work. This is because your response is determined by the type of glaucoma you have and the basic make-up of your eye.

Studies show a 78% success rate for SLT, with some patients responding well to the treatment, but others not responding at all. SLT lowers the IOP by about 30% when used as initial therapy. This is comparable to the IOP lowering of the most powerful and commonly used class of glaucoma medication (prostaglandin analogues). This effect may be reduced if the patient is already on glaucoma medications. The effect will generally last between 1-5 years and in some cases, longer than that. If it does not last at least 6-12 months, it is usually not considered successful.

Will I still need to use glaucoma medications?

What happens if it wears off?

The effects of the laser treatment might wear off in time – about half of all treatments stop working after five years. However, the treatment can be repeated.

Repeat treatments may or may not lower IOP as much as the first, and continued repeat laser will eventually not be effective. If SLT is not initially successful, repeat treatment is not likely to be effective. Alternatively, glaucoma medication can be used if the effect wears off over time.

What happens if it doesn't work?

If SLT fails to lower the IOP, then the glaucoma is treated by other means such as medications or surgery. The laser does not affect the success of these other types of treatment.

What are the alternative laser treatments?

Other similar procedures are argon laser trabeculoplasty (ALT) and micropulse laser trabeculoplasty (MLT). ALT was the first laser trabeculoplasty procedure. It uses a thermal (heat) laser and may cause more scarring in the drainage angle than SLT, which may also limit its ability to be repeated. MLT was designed to reduce the amount of energy delivered to ocular tissues by pulsing the energy in small increments. It therefore has similar potential benefits as SLT in terms of lower inflammation, tissue scarring and ability to repeat. The IOP lowering results of SLT, ALT and MLT are comparable.

In summary, SLT is a laser treatment for open-angle glaucoma that lowers eye pressure. It can be used as initial treatment, instead of eye drop medications, or as additional treatment when medications do not adequately reduce the eye pressure. It is often effective but that effectiveness may wear off after some period of time. It can be repeated but the effect may be reduced with repeat treatment. SLT is not a cure for glaucoma but one of many tools to keep it under control.